Daimler CEO Ola Källenius unveiled his company’s first serious foray into the world of electric vehicles on Thursday, hailing it as the dawn of a new era. Though the name Tesla was never mentioned, it is clear the German automaker sees the US company as a direct rival and the new EQS presents Mercedes’ first major challenge to the California outfit.

The premiere of the EQS comes just months after Daimler unveiled the latest iteration of its S-Class luxury sedan, which has defined its portfolio for decades. By designating the new vehicle with the S moniker, parallels are likely to be unavoidable, even if Mercedes was using the letter long before Elon Musk.

During the 20-minute digital world premiere, a number of Mercedes managers, engineers and designers, as well as a couple of celebrity brand ambassadors, spoke of what the car will mean for the environment and for the future of personal transportation — albeit not for everyone. Though no price has been set, analysts suspect the EQS’ starting price will be around €150,000 ($180,000) when it becomes available to customers in August.

The car is the first Mercedes ever built as an electric vehicle from the ground up rather than using components from an internal combustion vehicle. The company’s new electric vehicle architecture, or EVA, will serve as the basis for other luxury electric vehicles in its portfolio.

German automakers have been slow to make the shift to electric vehicles and have only recently begun showing earnestness in transforming their fleets — spurred mainly by environmental regulations as well as increased demand for electric vehicles.

Källenius said the vehicle would help reduce carbon emissions and would also be “produced in Germany in a carbon-neutral way.” Under his leadership the company has indeed sought to pivot toward sustainability. Last year, for instance, the company unveiled its massive new €730 million high-tech production facility, a carbon-neutral site known as Factory 56, in Stuttgart, hailing it as a milestone of flexibility and sustainability. 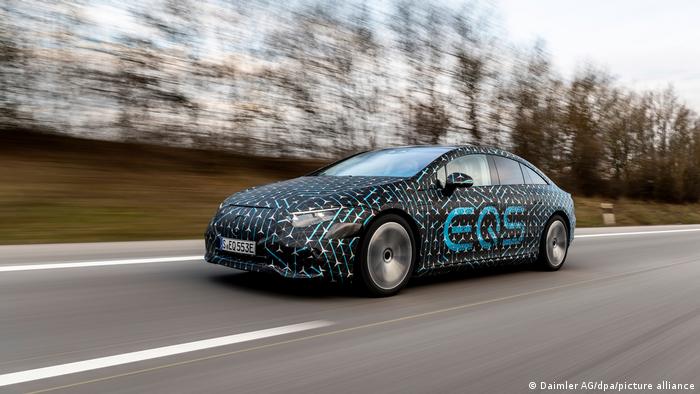 The new EQS, seen here in street camo, is the most aerodynamic series car ever produced, allowing it to travel 770 km on a single charge in ideal conditions

How far can you drive it, nominally at least?

The new EQS boasts up to 770 kilometers (478 miles) of driving range on a single charge (based on EU testing standards), besting Tesla’s next-generation Model S luxury sedan by 110 kilometers. The company says it achieves that performance thanks to efficient design — the vehicle is the most aerodynamic series production car ever, with a drag coefficient of 0.20 — as well as in-house designed energy management software. Real-world range for electric vehicles tends to be considerably lower, especially over time as the batteries deteriorate, just as very few drivers can achieve cars’ official fuel consumption figures on actual roads.

Mercedes, BMW, Ford, Hyundai, Volkswagen, Audi and Porsche are all part of the joint venture behind the IONITY network of highway charging stations across Europe and EQS owners will be able to charge their vehicles on the fast-charging network free of charge for one year.

Beyond driving performance and range, the presentation also stressed the car’s luxurious appointments, foremost among them, its large touchscreen, which sweeps across the entire width of what used to be the dashboard. There, too, parallels to Tesla’s Model S are hard to ignore.

Why are analysts so bullish?

“Daimler is the big dog when it comes to luxury vehicles in terms of handling, comfort and opulent interior design. They will certainly be able to translate that into the electric vehicle sector,” according to Jürgen Pieper, an automobile analyst from Frankfurt-based Metzler Bank.

Deutsche Bank called the new vehicle a “game changer,” not only for Mercedes but for the entire German automobile industry. “The car sets the bar for technology, design and quality,” wrote automobile analyst Tim Rokossa, saying that the EQS proved traditional carmakers could make the shift to building electric vehicles.

After being pummeled on markets in the wake of financial penalties stemming from the “diesel gate” emissions scandal and fears the Stuttgart-based company couldn’t transform itself, Daimler stocks have seen a sharp rebound of late, as it has worked to prove critics wrong.

The state bank of Baden-Württemberg, where Daimler is located, says electric automobiles currently make up about 10% of European new car sales and it estimates that share could rise to about 60% by the end of the decade. Mercedes Benz Cars Marketing and Sales Manager Britta Seeger says that share may grow larger still, and at a faster pace.

ByteDance: CEO of TikTok’s Chinese owner to step down